Lesslie Newbigin, “The Spirit and Our Election in Christ” 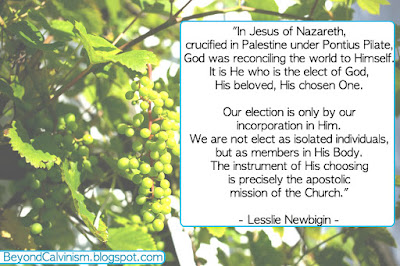 Here is an excerpt from Reformed theologian and missionary Lesslie Newbigin, from “The Spirit and Our Election in Christ” in Lesslie Newbigin, The Household of God (the whole book is available online here), pages 111-114:

And we can also see that wherever the missionary character of the doctrine of election is forgotten; wherever it is forgotten that we are chosen in order to be sent; wherever the minds of believers are concerned more to probe backwards from their election into the reasons for it in the secret counsel of God than to press forward from their election to the purpose of it, which is that they should be Christ's ambassadors and witnesses to the ends of the earth; wherever men think that the purpose of election is their own salvation rather than the salvation of the world; then God's people have betrayed their trust. And wherever, on the other hand, the truth is grasped that God so loved the world that He gave His only begotten Son; that His purpose to redeem the world necessarily requires that men's salvation should be not by an unmediated act of God directed to each individual human soul in isolation, but by the operation of a love which works on the plane of human history, mediated by the concern of man for man knitting men into a visible community: then it is seen that this can only be by the way of election, by the choosing of one to be the channel of grace to his neighbor until all men are knit together in one redeemed fellowship.


It is clear that no discussion of the nature of the Church can avoid dealing with the doctrine of election, and it is also clear that this must come in the context of our discussion of the Church as the community of the Holy Spirit. Calvin in the Institutes, after treating of Christ's completed work of atonement by His death, resurrection, and ascension, immediately goes on to say that it is by the secret working of the Holy Spirit that we enjoy Christ and all His blessings (III 1: 1), and then proceeds to a lengthy exposition of regeneration as the work of the Holy Spirit, faith itself being treated primarily as one of the Spirit's fruits. This, surely, is the right and Scriptural order. It is by the work of the Holy Spirit alone that word and sacraments have power to mediate Christ to us, and that faith is given to us whereby to receive Him. And we are bound to go on to confess that this gift of the Holy Spirit is of God's pure grace, given to those whom He chooses according to the secret counsel of His will. It is all "according to the election of grace (Rom. 11: 5)." This living presence and power of the Holy Spirit is the only source of our regeneration. 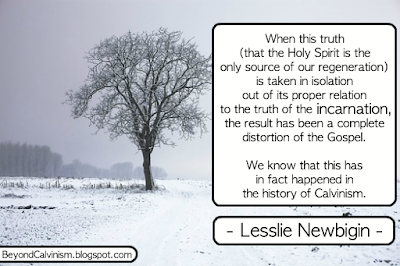 All this we must surely confess. But we must also go on to insist that when this truth is taken in isolation out of its proper relation to the truth of the incarnation, the result has been a complete distortion of the Gospel. We know that this has in fact happened in the history of Calvinism. If instead of taking as the starting point of our thought the fact of Christ, we take the undoubted truth that God can choose and regenerate by the secret working of His Spirit whomsoever He will, it will inevitably follow that the actual work of Christ in history will come to take a place other than the determinative center. The actual visible society which He founded will give place at the center of our thought to the invisible number of the elect known only to God; the visible and tangible sacraments which He gave will seem less and less essential to salvation; the missionary task will be no longer integral to the very being of the Church, for as the young William Carey was told when God chooses to save the heathen He can do it without our aid; and in the extreme development of this movement in Quakerism even the Scriptures themselves will cease to have a central place, because the Spirit is directly given to every man and His witness requires no confirmation from any other source.

But the Gospel is good news of a very different kind. It is news of the actual fact that in Jesus of Nazareth, crucified in Palestine under Pontius Pilate, God was reconciling the world to Himself. It is He who is the elect of God, His beloved, His chosen One. Our election is only by our incorporation in Him. We are not elect as isolated individuals, but as members in His Body. The instrument of His choosing is precisely the apostolic mission of the Church. "I chose you," says the incarnate Lord to His apostles, "and appointed you, that ye should go and bear fruit (John 15: 16)." At their first proclamation of God's saving acts these same apostles tell the multitude of their hearers: "To you is the promise, and to your children, and to all that are afar off, even as many as the Lord our God shall call unto Him (Acts 2: 39)." And the great apostle of the Gentiles, recalling his first preaching to the Thessalonians, says to them: "Knowing, brethren beloved of God, your election, how our gospel came not unto you in word only but also in power, and in the Holy Ghost, and in much assurance (I Thess. 1: 4-5)."  The source of election is in the depths of God's gracious will "before the foundation of the world"; its context is "in Christ"; its instrument is the apostolic mission to the ends of the earth; its end is to sum up all things in Christ; and its means, seal, and token is the presence of God's Holy Spirit--opening men's hearts to believe the Gospel, knitting them in love into the fellowship of the body of Christ, giving them in foretaste the powers of the age to come, and sealing them as Christ's until His coming again. The life of the visible Church on earth is thus the reality within which alone the doctrine of election is to be understood. 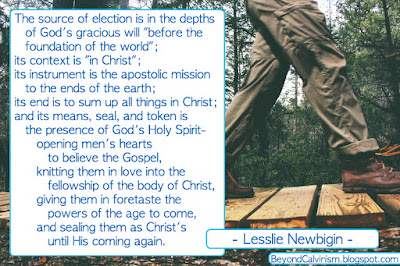 The Church on earth is no mere earthly shadow of an invisible and heavenly substance. It is both the first-fruits and the instrument of God's gracious election, for His purpose is precisely the re-creation of the human race in Christ. In the same way the life of the visible Church is the reality within which alone the doctrine of the Holy Spirit is to be understood. We share in Christ's anointing only as we share in His body, in the baptism wherein we die with Him and are raised with Him, and in the common life wherein by the manifold gifts of the Spirit the body is built up in love and furnished with all that it needs for the prosecution of its divinely given mission.

It is because the salvation is corporate and cosmic that the manner of its revelation is through a concrete historic event at a particular point of space and time. A message whose essential meaning could be grasped by each individual apart from his relationship with his fellow men and with the rest of the created world could one may suppose be revealed at a great number of different places and times. Indeed the only just manner of communication would be so to speak a separate communication sent to each individual's address. But a salvation whose very essence is that it is corporate and cosmic, the restoration of the broken harmony between all men and between man and God and man and nature, must be communicated in a different way. It must be communicated in and by the actual development of a community which embodies if only in foretaste the restored harmony of which it speaks. A gospel of reconciliation can only be communicated by a reconciled fellowship. And at the heart of such a community must be the actual historical and geographical center from which it starts and grows. In other words it will be communicated by the way of election, beginning from one visible center and spreading always according to the law that each one is chosen in order to be the means of bringing the message of salvation to the next.