Lesslie Newbigin, "the gospel...calls for a change of mind" 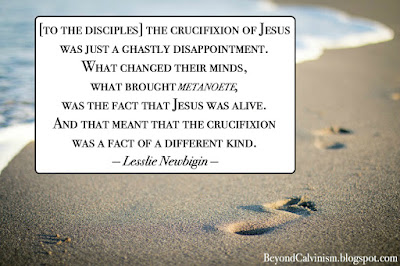 Here is an excerpt from the Introduction to Lesslie Newbigin’s book, To Tell the Truth: The Gospel as Public Truth (the whole book is available at an external site online in PDF here), from pages 5-6; 9; 10-13 (emphasis added):

In the prevailing climate of subjectivism the affirmation of the gospel as public truth is greeted with skepticism. “What do you mean by ‘gospel’? A great variety of religious ideas have been—at sundry times and places—offered under this title. Has not this been so from the beginning? [...] All religion, including the Christian religion, is an ever changing affair, and it is futile to appeal to something which lies behind the Christian religion as we now have it—’the gospel.’” What is to be said in response to this often repeated criticism?

Plainly, Christianity is a constantly changing phenomenon. The gospel, on the other hand, is news about things which have happened. What has happened has happened, and nothing can change it.

the opening words of the ministry of Jesus include the word metanoia [“repent”/“change your mind”]. At the very beginning we are warned that to understand what follows will require nothing less than a radical conversion of the mind.

The problem of making sense of the gospel is that it calls for a change of mind which is as radical as is the action of God in becoming man and dying on a cross. With every new fact, or alleged fact, it is always possible—indeed, it is natural—to take note of it without allowing it to change our mind in any radical way. [The Roman historian] Tacitus could record the fact that someone called “Christus” had been crucified but had given rise to a pestilential sect without this information changing his mind. The two disciples on the way to Emmaus knew that Jesus had been crucified but that had not changed their belief that the Messiah, when he came, would be a successful practitioner of liberation theology. The crucifixion of Jesus was just a ghastly disappointment. What changed their minds, what brought metanoete, was the fact that Jesus was alive. And that meant that the crucifixion was a fact of a different kind. As Einstein used to say, what you call a fact depends on the theory you bring to it.

The resurrection is, of course, the point at which the question “What really happened?” becomes most pressing. To believe that the crucified Jesus rose from the dead, left an empty tomb, and regrouped his scattered disciples for their world mission can only be the result of a very radical change of mind indeed. Without that change of mind, the story is too implausible to be regarded as part of real history. Indeed, the simple truth is that the resurrection cannot be accommodated in any way of understanding the world except one of which it is the starting point. Some happenings which come to our notice may be simply noted without requiring us to undertake any radical revision of our ideas. The story of the resurrection of the crucified is obviously not of this kind. It may of course, be dismissed as a fable, as the vast majority of people in our society do. This has nothing to do with the rise of the modern scientific world-view. The fact that a man who has been dead and buried for three days does not rise from the tomb was well known even before the invention of electric lights. If it is true, it has to be the starting point of a wholly new way of understanding the cosmos and the human situation in the cosmos. In the tradition of the Church the only real analogue for the resurrection of Jesus has been the creation itself. We cannot use any of the tools of science to go behind the creation and ask: “What was there before there was anything?” We can only take the existing world as our starting point. The resurrection of Jesus from the dead is the beginning of a new creation, the work of that same power which creation itself exists. We can decline to believe it and take it for granted that we have only the old creation to deal with. Or we can believe it and take it as the starting point for a new way of understanding and dealing with the world. Here two mutually incompatible ways of understanding history meet each other. The “continuing conversation between the present and past” which is the Christian reality in the world is both an ever continuing exegesis of the story which is the gospel and simultaneously a continuing insertion of new creation in the midst of the old.

I am trying to talk about the gospel—good news about something which happened and which, in that case, does not change. The way of telling it, of understanding it, however, does change. It changes within the time span of the New Testament. But we take leave of serious historical integrity if we replace the record of the first witnesses with myths about various psychological experiences as the origin of the story. There is a gospel to announce today because in the light of the resurrection the whole story of Jesus can be seen not as a series of ghastly misunderstandings and disappointments but as the supreme action of God’s holy love, and the whole story of Israel can be seen—as the two disciples on the Emmaus Road began to see it—as having its fulfillment in this action.

And when the Christian Church affirms the gospel as public truth it is not engaged in a self-serving exercise. It is not simply promoting its own growth, though surely the Church rejoices when there are more people who are grasped by the truth as it is in Jesus and are committed to following the true and living way that Jesus is. But when the Church affirms the gospel as public truth it is challenging the whole of society to wake out of the nightmare of subjectivism and relativism, to escape from the captivity of self turned in upon itself, and to accept the calling which is addressed to every human being to seek, acknowledge, and proclaim the truth. For we are that part of God’s creation which he has equipped with the power to know the truth and to speak the praise of the whole creation in response to the truthfulness of the Creator.

You can read the whole book, To Tell the Truth: The Gospel as Public Truth, at an external site online in PDF here.

If you're asking yourself, "Even if this is true, what does this fact from 2000 years ago have to do with me today?" to find Newbigin's answer, I also recommend his book, Sin and Salvation (1956), which is available in PDF online here.

More from Lesslie Newbigin:
Posted by Andrew at 4:44 PM