Into and out of 5-point Calvinism: a bit about my journey.

I became convinced of five-point Calvinism shortly after completing my undergraduate degree, largely due to the influence of John Piper and especially his book The Justification of God: An Exegetical and Theological Study of Romans 9:1-23.  Over the next five years I was immersed in "New Calvinist" (ie, "Young, Restless, Reformed") circles, eventually becoming part of the leadership team in a Calvinistic SBC church plant.

After a little over a year working with the new plant, through the providence of God, I came to face head-on the logical conclusions of these doctrines and I began to deeply consider how to reconcile Calvinistic determinism and the evil in the world on the one hand, with the character of God as revealed throughout the Bible on the other. This led me down the road of rediscovering the true character of God, finally seeing again that God's character and way are most fully and finally revealed in the Lord Jesus (see, for example, Hebrews 1:3 and Colossians 1:15).

The last passage that held me to the Calvinist position was my understanding of Romans 9. When I finally realized this, I re-arced (biblearc.com) it trying to discover only the flow of Paul’s argument and trying my best not to rely on the Calvinist presumptions I had previously brought to it. When I got to the last verses, I found the inference in 30-33, which I had never before considered together with the preceding context, at least not seriously. Verse 30 begins as an inference (or conclusion/summary) from what Paul had argued in the preceding verses. I noticed that Paul does not conclude that Israel is cut-off and that the Gentiles are in because of election/predestination, but instead he says it is because of belief vs those who pursued righteousness by works (and compare this with 11:20 & 23). If Paul had made the argument in verses 6-23 that Calvinists claim, then verses 30-33 just do not fit (not to mention chapters 10-11). This especially made me see that I had misunderstood the chapter all along. When I re-examined the preceding verses in this light, the whole of the passage fell into place (for example, verses 22-23 made a much better parallel with Ephesians 2, Romans 2:4, 2 Peter 3:9, and especially 2 Timothy 2:20-21 than with any idea of double predestination).  (For more on this chapter, see my post: "Questions to Ask as you Approach Romans 9").


Why I started this blog.

I started this blog because one of the most difficult issues to deal with in coming out of Calvinism was not knowing where to turn. It was from reading the Scriptures and Calvinist authors themselves that I became convinced that the two could not be reconciled—in other words, it was not because I had read a compelling argument from another perspective—this meant that I had a doctrinal gap that needed to be filled (it is unfortunately common for those in New Calvinist circles to read exclusively Calvinist authors, and this was certainly true of me. Austin Fischer recounts a similar experience during his interview with Shane Blackshear of Seminary Dropout, link).

Thankfully, my Calvinist friends challenged me to answer the proof-texts that had once convinced me of Calvinism, and this in turn helped me to discover alternative (and, I believe, better) interpretations of these texts. This blog is intended to share those and other resources that I believe will help the growing number of others who are facing the same journey.

My soteriology today can be summarized by changing the middle three letters from TULIP to become: 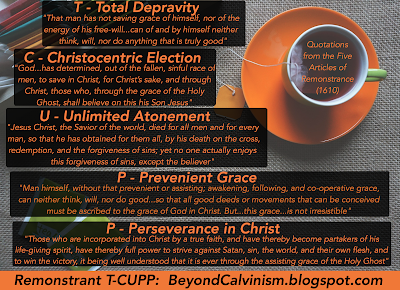 
This fits nicely with the Articles of Remonstrance, as shown in the image above, and therefore might be called "4-point Arminianism", though you can also find those who hold a similar view under a number of other labels, including: "modified (or moderate) Calvinist"; "evangelical Calvinist"; "revisionist Reformed"; "moderate Arminian"; (4-point) "Reformed Arminian"; "Wesleyan"; "Wesleyan-Anabaptist"; "Anabaptist"; and "Traditionalist (Southern Baptist)". (For more on labels, check out Dr Roger Olson's post, "Must one agree with Arminius to be Arminian?"--note, however, that while Dr Olson calls this view "evangelical synergism", not all would agree with that descriptor, for example: Dr Pinson, "Who's afraid of the word 'Synergist'?")

My family and I are no longer a part of the church plant, and are now covenant community members of a non-denominational church, which is located in and ministers to one of the poorest neighbourhoods in our city, and whose soteriology would best be characterized as Wesleyan-Arminian.

The three books that I found most helpful early on in my study were:


Although not directly on topic, I also got a lot of encouragement from AW Tozer's The Pursuit of God, which I picked up after one Arminian writer called it "basically the preceding Arminian version of John Piper's Desiring God." (The Pursuit of God is available as a free download from a number of websites, one being Project Gutenberg here.)

And, of course, the online article "The FACTS of Salvation: A Summary of Arminian Theology/the Biblical Doctrines of Grace" by Dr Brian Abasciano was also significant.

Here are some recommended reading lists to get you started on your journey: