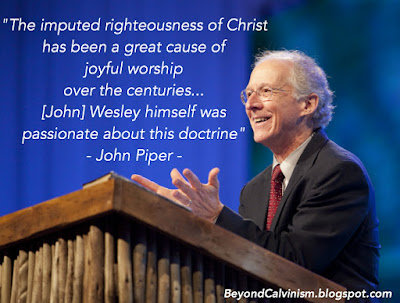 Here is an excerpt from Counted Righteous in Christ: Should We Abandon the Imputation of Christ's Righteousness? by popular Calvinist pastor John Piper (the full book is available for free from the Desiring God website here), pages 35-36 & 37-38, bold mine:

The imputed righteousness of Christ has been a great cause of joyful worship over the centuries and has informed many hymns and worship songs. The theme has cut across Calvinist-Arminian, Lutheran-Reformed, and Baptist-Presbyterian divides. As we look at some examples of hymns and worship songs, I admit that it is possible to put a different, newer meaning on some of these words, but they were not written with the newer meaning, and, as a people, we would be dishonest to treat them as if they carried the new meaning.

“AND CAN IT BE”
(CHARLES WESLEY)
No condemnation now I dread;
Jesus, and all in him, is mine!
Alive in him, my living head,
And clothed in righteousness divine,
Bold I approach the eternal throne,
And claim the crown through Christ my own.

We may take John Wesley for an example to support our claim that these songs are built on the historic understanding of Christ’s imputed righteousness, rather than on more recent reinterpretations. Wesley himself was passionate about this doctrine, and probably more so than anywhere else in his sermon titled “The Lord Our Righteousness” (1765). He is defending himself against attacks that he did not believe this doctrine. Part of his defense is to refer to the hymns he has published. He translated Nicolaus L. Von Zinzendorf’s hymn “Jesus, Thy Blood and Righteousness” and commented on it and the others he had published like this:

The Hymns . . . republished several times, (a clear testimony that my judgment was still the same,) speak full to the same purpose [of my belief in the imputed righteousness of Christ]. . . . Take one for all—
Jesu, thy blood and righteousness
My beauty are, my glorious dress: ’Midst flaming worlds in these array’d, With joy shall I lift up my head.

“The whole hymn,” he says, “expresses the same sentiment, from the beginning to the end.” He goes on in this sermon to make clear what his hymns and essays mean: “To all believers the righteousness of Christ is imputed; to unbelievers it is not.” [Note 15]

From these few examples, we can see that the doctrine of the imputation of Christ’s righteousness has not been experienced as marginal or minor in the worship of Christ. It has been explosive with revival power, personal comfort, and deep, biblically-rooted joy in worship.

Then, to make things as clear as possible, he [John Wesley] quotes from his own Treatise on Justification published a year earlier (1764):

Wesley’s view developed over the years on this issue, but he seems to have landed in the traditional Protestant position on imputation in the latter half of his ministry, as evidenced by the sermon “The Lord Our Righteousness” (cited above) and “The Wedding Garment” (1790).

John Wesley observed, “But as the active and passive righteousness of Christ were never, in fact, separated from each other, so we never need separate them at all, either in speaking or even in thinking. And it is with regard to both these conjointly that Jesus is called ‘the Lord our righteousness.’” John Wesley’s Sermons, Sermon #20, “The Lord Our Righteousness,” preached at the Chapel in West-Street, Seven Dials, on Sunday, November 24, 1765

More from BeyondCalvinism:
Posted by Andrew at 10:58 AM